DVD Review: A Survey of Church History, Part One 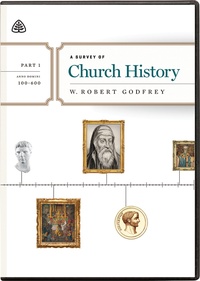 For anyone who loves history or theology, I recommend Ligonier's teaching series, A Survey of Church History. W. Robert Godrey is the teacher, and he's fabulous! The series has six parts. The first part covers A.D. 100-600, roughly. This may be the most unfamiliar and most intimidating period of church history. But Godfrey manages to keep it informative and interesting. He even manages to work in a few jokes at R.C. Sproul's expense!

The twelve messages are


I have always wondered what the difference was between the Eastern Orthodox and the Western church. And I believe he covers that a bit in this series. The answer is the Eastern Orthodox focuses more on the wonder of the Incarnation and the Western church focuses more on the cross. I also found the lesson on Augustine to be enjoyable. I had started reading City of God by Augustine earlier in the year, but had put it aside. After listening to this series, I picked it up again. I am now making some progress in it!

© Becky Laney of Operation Actually Read Bible
Posted by Becky at 8:35 AM