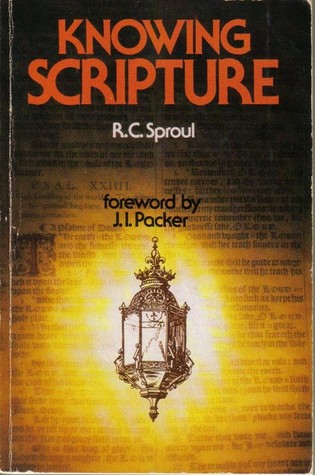 From the foreword: IF I were the devil (please, no comment), one of my first aims would be to stop folk from digging into the Bible.

From chapter one: Why study the Bible? It may seem odd and foolish to raise this question since you probably would not be reading this book unless you were already convinced that Bible study is necessary.

Knowing Scripture is a practical how-to-STUDY-the Bible book by R.C. Sproul first published in 1977. (It has been republished, but I haven't bought an updated edition. I'm not sure if Sproul has added extra content.)


“Most people are bothered by those passages of Scriptures they don’t understand, but for me I have always noticed that the passages that bother me are those I do understand.” ~ Mark Twain

He also argues that the Bible is NOT dull or boring. (Though he adds that *if* it were the world's most boring book, it would still be our duty to read it because we're commanded to know the Book.)


The preponderance of boredom that people experience with the Bible came home to me several years ago when I was hired to teach the Scriptures in required Bible courses at a Christian college. The president of the institution phoned me and said, "We need someone young and exciting, someone with a dynamic method who will be able to 'make the Bible come alive.'" I had to force myself to swallow my words. I wanted to say, "You want me to make the Bible come alive? I didn't know that it had died. In fact, I never even heard that it was ill. Who was the attending physician at the Bible's demise?" No, I can't make the Bible come alive for anyone. The Bible is already alive. It makes me come alive. (14)

He concludes that the reason people don't study the Bible has nothing to do with either myth. Not really.

He includes this startling fact: If you have read the whole Bible, you are in a small minority of Christian people. If you have studied the Bible, you are in an even smaller minority. (18) Sproul isn't saying that only Christian laypeople are lazy when it comes to reading or studying the Bible, the whole Bible. He's also saying that it's a problem among the clergy as well.

Countless times I have heard Christians say, "Why do I need to study doctrine or theology when all I need to know is Jesus?" My immediate reply is this: "Who is Jesus?" As soon as we begin to answer that question, we are involved in doctrine and theology. No Christian can avoid theology. Every Christian is a theologian. Perhaps not a theologian in the technical or professional sense, but a theologian nevertheless. The issue for Christians is not whether we are going to be theologians but whether we are going to be good theologians or bad ones. A good theologian is one who is instructed by God. (22)

He includes many reasons WHY Christians should study the Bible. One of my favorite quotes is, "But what happens when there is a conflict between what God says and what I feel? We must do what God says, like it or not. That is what Christianity is all about." That is Sproul telling it like it is. Not tickling anybody's ears, for sure. There is a follow-your-heart, follow-your-conscience, define-your-own-truth mentality that has even found its way into modern pulpits.

In chapter two, Sproul discusses personal Bible study and private interpretation. He argues that it is important to balance private interpretation with the church's teaching. The text has a definite meaning. A text can have more than one application, but it can only have one meaning. We're not free to read MEANING into a text and build our theology around a misinterpreted passage. Free perhaps being the wrong word. We are of course free to be bad theologians. But TRUTH should matter to us. And we should care more about what the scripture actually means than what we want it to mean. Should.

In this second chapter, Sproul talks about objectivity and subjectivity. He defines the terms EXEGESIS and EISOGESIS. At the heart of every bad sermon is eisogesis.

Exegesis means to explain what the Scripture says. The word comes from the Greek word meaning, "to guide out of." The key to exegesis is found in the prefix ex which means "from" or "out of." To exegete Scripture is to get out of the words the meaning that is there, no more and no less. (39)

Eisogesis has the same room but a different prefix. The prefix his, also coming from the Greek, means "into." Thus, eisogesis involves reading into the text something that isn't there at all. Exegesis is an objective enterprise. Eisogesis involves an exercise in subjectivism. (40)

In the third chapter, Sproul introduces hermeneutics, "the science of interpretation." What should be the means of interpretation? How should the Bible be interpreted? The Reformers argued--stood for and in some cases died for--the notion that Scripture should interpret Scripture. That the Bible was all one needed. He writes, "No part of Scripture can be interpreted in such a way as to render it in conflict with what is clearly taught elsewhere in Scripture." (40)

He spends a good deal of time in this chapter discussing the importance of reading the Bible literally.

The term literal comes from the Latin litera meaning letter. To interpret something literally is to pay attention to the litera or to the letters and words which are being used. To interpret the Bible literally is to interpret it as literature. That is, the natural meaning of a passage is to be interpreted according to the normal rules of grammar, speech, syntax, and context. The Bible may be a very special book, being uniquely inspired by the Holy Ghost, but that inspiration does not transform the letters of the words or the sentences of the passages into magical phrases. Under inspiration a noun remains a noun and a verb remains a verb. Questions do not become exclamations, and historical narratives do not become allegories. (49)

To be accurate interpreters of the Bible we need to know the rules of grammar; and above all, we must be carefully involved in what is called genre analysis. The term genre means simply "kind," "sort," or "species." Genre analysis involves the study of such things as literary forms, figures of speech, and style. (49)

The third way of interpreting the Bible--which he addresses in this chapter--is the grammatico-historical method. Here is where context and original meaning come into play.

The fourth chapter is the PRACTICAL chapter. He includes rules for biblical interpretations:
Rule 1: The Bible is to be read like any other book.
Rule 2: Read the Bible existentially. [He adds a disclaimer here, "What I mean is that as we read the Bible, we ought to get passionately and personal involved in what we read. I advocate this not only for the purpose of personal application of the text but for understanding as well. What I am calling for is a kind of empathy by which we try to "crawl into the skin" of the characters we are reading about." (66)]
Rule 3: Historical Narratives are to be interpreted by the didactic.
Rule 4: The implicit is to be interpreted by the explicit. [Not only do we have problems when we draw too many implications from the Scripture, but we also face the problem of squaring implications with what is explicitly taught. When an implication is drawn that is contradictory to what is explicitly stated, the implication must be rejected. (77)]
Rule 5: Determine carefully the meaning of words.
Rule 6: Note the presence of parallelism in the Bible. (There are three basic types of parallelism: synonymous, antithetic, and synthetic.)
Rule 7: Note the difference between proverb and law.
Rule 8: Observe the difference between the Spirit and the Letter of the Law.
Rule 9: Be careful with parables.
Rule 10: Be careful with predictive prophecy.

The fifth chapter is all about culture. Not only should we be mindful of the original cultures--of the Old and New Testaments--but we should be--must be--mindful of our own culture. Difficulties can arise when we ignore our own culture and bring our own cultural bias or understanding into Scripture. He writes,

"We need to become aware that the perspective we bring to the Word may well be a distortion of truth. I am convinced that the problem of the influence of the twentieth-century secular mindset is a far more formidable obstacle to accurate biblical interpretation that is the problem of the conditioning of ancient culture." (105)

This section also includes a Bible Reading Program for Beginners.

Why have Christians been so derelict when it comes to biblical study? Is it merely a lack of discipline or devotion? That may be part of the problem and consequently produces much guilt among Christians for leaving undone those things that should have been done. I think, however, that more than a problem of discipline, it is a problem of method.  We begin our Bible reading in a spirit of grim determination and diligently read the book of Genesis. Genesis provides important information about the foundations of biblical history and moves smoothly through the narrative history of the patriarchs. So far so good. Exodus is full of drama with the exploits of Moses and the liberation of Israel from the tyranny of the Egyptians. Cecil B. DeMille and Charlton Heston have given millions of us a sense of familiarity with these events. Then comes Leviticus. Here the attrition rate of interested readers begins to accelerate. Many of us who wade through Leviticus are finished off by Numbers. A few die-hards make it through Deuteronomy, and even a persevering few make it through the whole New Testament. Actually I have discovered that the majority of people who read the first five books of the Old Testament will make it through the whole Bible. Most people fail to read the Old Testament by getting bogged down in Leviticus and Numbers. The reasons are obvious. These books deal with detailed matters of the organization of Israel including lengthy lists of case law. So much of the material is foreign to us and makes difficult reading.Yet, the information contained in these books is of crucial importance for understanding the scope of redemptive history. An accurate understanding of the New Testament depends on an understanding of these books. In fact, once a person acquires a general understanding of the whole scope of Scripture, he usually discovers that Leviticus and Numbers are fascinating and delightfully interesting. But without the general understanding the details seem somewhat unrelated. To overcome the problems so many people have with reading the Bible I suggest an alternate route to our goal. Read the biblical books in the following order:

Genesis
Exodus
Joshua
Judges
1 Samuel
2 Samuel
1 Kings
2 Kings
Ezra
Nehemiah
Amos
Hosea
Jeremiah
Ecclesiastes and Song of Solomon
Psalms and Proverbs.
This list of readings gives an overview of the Old Testament and provides the framework for understanding it. (121-22)

© Becky Laney of Operation Actually Read Bible
Posted by Becky at 8:53 AM