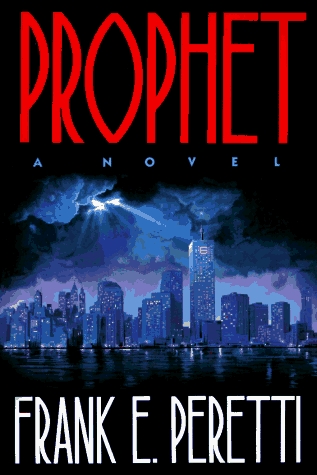 Premise/plot: Prophet is a novel about the media, about reporting news, about politics, about biases, about balancing what do people NEED to know, what do we want people to know, and what do people think they need to know. All three are important, of course. Sometimes people NEED to hear the truth, need to know the facts, even if it isn't something they want to hear.

The hero of The Prophet is a anchor man on the news. Through him readers get a behind-the-scenes look--though it is an extremely outdated behind-the-scenes look--at a newsroom in action. Readers get to learn about what stories make it on the air, and which stories get dropped at the last minute. They get to hear WHY stories are chosen over others. They get to see how news is framed.

It is also a novel about abortion. When I first reread it in 2013, I thought the bias was over-the-top extreme. That it was presenting the opposing viewpoint in such exaggerated extremes that it was losing touch with reality. Then I read Gosnell in 2017. I no longer think Prophet was exaggerating. Gosnell was a SHOCKING true-crime nonfiction read. It was not a Christian book pushing a Christian agenda. It was nonfiction aimed at a general audience. So was Peretti being prophetic writing about dangerous abortion clinics killing women and getting away with it?! I'm not sure I'd go that far.

I would recommend pairing Gosnell and Prophet for adult book clubs.


Son, the days ahead are going to be difficult for you. I want you to know that ahead of time. The Truth is coming after you, son, and it's going to sink its claws into you and not let go until you start paying attention. There's something you need to keep in mind about the Truth, John. Depending on where you stand, the Truth can be your best friend or your worst enemy. So let me tell you something. I mean, if I never get the chance to say anything else to you, at least let me say this: Make friends with the Truth, John, as quickly as you can." (44)

Well, if he couldn't nail down what Evil was, why fight it? Whatever was evil today could be voted, legislated, or judged good tomorrow. Maybe if we just wait long enough, he thought, we'll get comfortable with the way things are. (146)

The media being what it is, you don't have to withhold information. You don't even have to lie that much. Just pour on enough distraction and people won't know which way to look. (357)


© Becky Laney of Operation Actually Read Bible
Posted by Becky at 11:48 AM