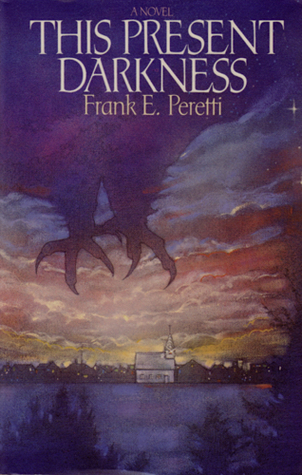 First sentence: Late on a full-mooned Sunday night, the two figures in work clothes appeared on Highway 27, just outside the small college town of Ashton.

Premise/plot: This Present Darkness is a Christian thriller by Frank E. Peretti. Angels, Demons, Humans wage war in a small American town. Before the actual battles begin it is a battle of ideas and world-views. Because, yes, ideas do matter....and ideas have consequences. The main characters are a pastor, Hank, a newspaper man, Marshall.

Something strange--peculiar, unsettling--is happening in Ashton. And Marshall and his reporter, Bernice, are on the verge of discovering what is going on. But the closer they get to the truth, the more dangerous it gets. This quest for the truth may just cost them their lives.

My thoughts: I read this one circa 1989 or 1990. It was a book I zoomed through then, and one I zoomed through now. Even though I vaguely remembered the ins and outs of the plot, I couldn't put it down. When I first read it, I had not read C.S. Lewis' Screwtape Letters. I think these two would pair up well for a book club discussion. It might also pair up well with a nonfiction book such as Ravi Zacharias' Deliver Us From Evil.

I also think it could be adapted into a potentially decent Christian movie. (There are no guarantees because a) how often do movies do the book justice b) Christian movies face harsh critics both from within and without the faith.)


"I preach the gospel of Jesus Christ, and there are plenty who appreciate it. Just where is this wedge you're talking about?" Brummel was getting impatient. "Hank, learn from the last pastor. He made the same mistake. Look what happened to him." "I did learn from him. I learned that all I have to do is give up, bag it, bury the truth in a drawer somewhere so it won't offend anybody. Then I'll be fine, everybody will like me, and we'll all be one happy family again. Apparently Jesus was misguided. He could have kept a lot of friends by wilting and just playing politics." "But you want to be crucified!" "I want to save souls, I want to convict sinners, I want to help newborn believers grow up in the truth. If I don't do that, I'll have a lot more to fear than you and the rest of the board." "I don't call that love, Hank." "I love you all, Alf. That's why I give you your medicine, and that goes especially for Lou." (35)

Complacency pointed his taloned finger and screamed, "You have followed her! You and your lackeys! You have spoken words to her mind, confused her!" Deception only raised his eyebrows in mild indignation and answered sedately, "Only upon her own invitation. We have only told her what she prefers to know. That can hardly be called an attack." (50)

© Becky Laney of Operation Actually Read Bible
Posted by Becky at 9:59 AM