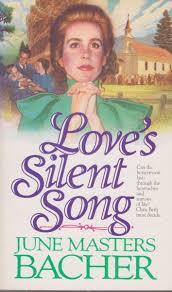 First sentence: Dobbin's loud neigh from behind the cabin broke the tranquility of the afternoon.

Premise/plot: Love's Silent Song is the sequel to Love Is A Gentle Stranger. Both books are set in Oregon and star a young school teacher named Chris Beth. This second novel opens shortly after her marriage to a young preacher named Joe Craig. Either shortly before the wedding or shortly after the wedding the couple adopted an orphaned baby boy; he was orphaned because of a flood. That flood is the only catastrophe readers miss out on in this pioneer book. Drought. Grasshoppers. Scarlet Fever. Fire. Add in the following: tense race relations, gossip, and secrets. The result is plenty of melodrama with some touching scenes where Scripture verses are exchanged between tears and laughter.

Early on in this novel I decided that one of the themes was from the song 'Jesus Loves the Little Children.' And sure enough by the end of the novel, 'red, yellow, black, and white' were brought together in unity in the community in a supportive, loving way. For the record, the book actually uses that line--and spends several sentences talking about each community using those descriptors.

This was my first time reading Bacher. I bought this book for twenty-five cents at a charity shop. I don't regret the quarter spent. If the shop had had more books in this series I probably would have bought them to all read together. Is any book series to be judged based on the middle book alone?