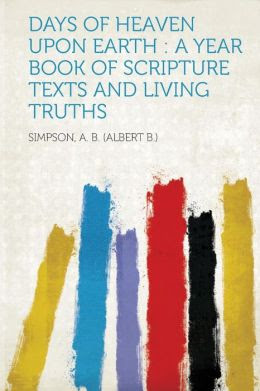 From Days of Heaven Upon Earth: A Year Book of Scripture Texts and Living Truths. A.B. Simpson. Originally Published 1897. 372 pages.


January 1.  “Redeeming the time” (Ephesians 5:16). Two little words are found in the Greek version here. They are translated “ton kairon” in the revised version, “Buying up for yourselves the opportunity.” The two words ton kairon mean, literally, the opportunity. They do not refer to time in general, but to a special point of time, a juncture, a crisis, a moment full of possibilities and quickly passing by, which we must seize and make the best of before it has passed away. It is intimated that there are not many such moments of opportunity, because the days are evil; like a barren desert, in which, here and there, you find a flower, pluck it while you can; like a business opportunity which comes a few times in a life-time; buy it up while you have the chance. Be spiritually alert; be not unwise, but understanding what the will of God is. “Walk circumspectly, not as fools, but as wise, buying up for yourselves the opportunity.” Sometimes it is a moment of time to be saved; sometimes a soul to be led to Christ; sometimes it is an occasion for love; sometimes for patience: sometimes for victory over temptation and sin. Let us redeem it.

January 2. But these spiritual habits are not the outcome of some transitory impulse, but are often slowly acquired and established. They begin, like every true habit, in a definite act of will, and they are confirmed by the repetition of that act until it becomes a habit. The first stages always involve effort and choice. We have to take a stand and hold it steadily, and after we have done so a certain time, it becomes second nature, and carries us by its own force. The Holy Spirit is willing to form such habits in every direction of our Christian life, and if we will but obey Him in the first steppings of faith, we will soon become established in the attitude of obedience, and duty will be delight.

January 7. It is the little stumblings of life that most discourage and hinder us, and most of these stumblings are over trifles... let us keep the heavenly flame aglow upon the altar of the heart. It takes very much less effort to maintain a good habit than to form it. A true spiritual habit once formed becomes a spontaneous tendency of our being, and we grow into delightful freedom in following it.

January 21. "Pray without ceasing." (1 Thessalonians 5:17) An important help in the life of prayer is the habit of bringing everything to God, moment by moment, as it comes to us in life. This may be established as a habit on the principle on which all habits are formed, of repeated and constant attention, moment by moment, until that which is at first an act of will, becomes spontaneous and second nature... God is ever wanting to add to us, to develop us, to enlarge us, to teach us more and more, but it is ever in the line of things which He has already taught us, and in which we have been established.

January 30. Some one has said that the devil can wall us in, but he cannot roof us over. We can always get out at the top. Our difficulties are but God's challenges, and He makes them so hard, often, that we must go under or get above them.

January 31. What people need to-day to satisfy their deep hunger and to give them a permanent and Divine experience is to know, not sanctification as a state, but Christ as a living Person, who is waiting to enter the heart that is willing to receive Him.