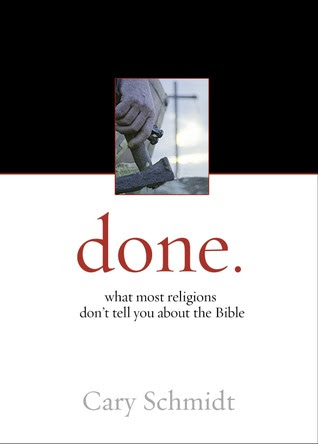 Done: What Most Religions Don't Tell You About the Bible. Cary Schmidt. 2005. Striving Together Publications. 114 pages.

I'll start with the good news. The main premise of this book is that salvation is by grace alone. That the Christian life is not DO. The true Christian life is DONE. Yes, done. All done by Christ. There is not one thing to be added to his work. Christ's life, death, resurrection, and ascension has DONE it all. Everything that needed doing was done by another--by Christ--on our behalf. His work has been credited to us, unworthy though we may be.

The book is seeker-friendly, intentionally designed to speak to a non-Christian audience.

While I agreed with the main premise, I found the rest of this one to be theologically hit and miss. Sometimes I agreed. Sometimes I strongly disagreed.

What annoyed me most with this one is the overuse of the word "most." The author was making plenty of generic claims--or proclamations--using the word MOST; statements that aren't qualified, aren't proven, aren't backed up by anything. "Most preachers" or "Most churches" or "Most Christians" or "Most religions." They were using these "most" claims to argue that the concept of a grace-based salvation is new; that this truth has been lost, misplaced, buried, suppressed, withheld, etc. That "most churches" don't preach this truth because they don't want you to know about grace because they thrive on works. If the author were to be more specific, if he were perhaps to pick a label--a denomination--to go with these statements I'd be less skeptical. The truth is that GRACE--while sometimes misunderstood by some individuals--has been taught and proclaimed--often passionately, often with great zeal--for centuries. The true gospel--Salvation BY GRACE ALONE--can be found plenty of places; found in plenty of books, plenty of sermons, plenty of tracts, plenty of songs, plenty of personal testimonies.

I think his statements about how "most" churches don't want you to know what is in the Bible bothered me the greatest.


The true message of the Bible is DONE. In other words, everything necessary to restore you to God and bring you into eternal life with Him has already been DONE.

Would you like to know where you are headed after you die? If there were a way to know for sure where you would spend eternity, wouldn’t you want to know?

These are weighty questions, but the Bible answers them all very clearly. The message isn’t so much hidden, as ignored or rewritten to fit the religious agendas of men. When you take the Bible at face value, the way God intended it to be taken, it all adds up!

It’s not about jumping high enough, it’s about admitting that we can’t jump high enough, and then trusting in someone more powerful than ourselves to lift us high enough!

Even religions that claim to “believe in Jesus” seem to teach that He only paid for part of our sin. Many teach that there is still much that you must DO to make atonement for your sin—as though Jesus made partial payment and you have to make the rest. This simply isn’t the message of the Bible. Jesus paid it all! DONE.