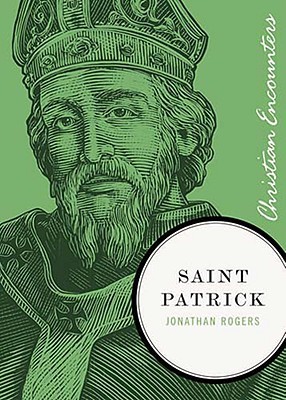 Is Saint Patrick by Jonathan Rogers a must read? Probably not. But for those interested in Saint Patrick himself, in early church history, OR, in early British history this one can prove interesting enough. (It helps that it's short.)

I am not particularly interested in Saint Patrick or early church history. (I got my fill of that last fall.) But. I am interested in British history, and that was enough to keep me reading. This one is set in England and Ireland during the fourth and fifth centuries. Readers learn a bit about the Roman occupation of Britain, and the Roman collapse. Saint Patrick lived in the aftermath of that. The Romans have technically left the island, but, only just. And the world in which he lived was a reminder of what had been--traces remained.

Readers learn about Saint Patrick. What few things we know for sure. The many, many things we're not quite as certain about. And things that are pure legend through and through. The author shares plenty of legends--for those looking for the full experience. But the book is almost structured around the basic facts he revealed about himself in two of his works. (Both his 'Confession' and his 'Letter' are included. I skipped these. The author quoted them plenty throughout the book though.)

What I appreciated most about the book was the context work: learning about how people lived in England and Ireland during this time period, what their society and culture was like (or might have been like), what Christianity looked like--its structure, its influence, etc.

© Becky Laney of Operation Actually Read Bible
Posted by Becky at 9:33 AM