Book Review: To The Glory of God 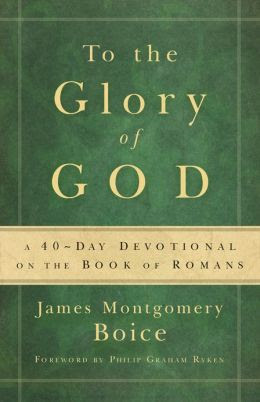 James Montgomery Boice loved to preach from the book of Romans. Marion Clark selected forty excerpts from his works to be used as devotional readings. (Clark had much to choose from: 239 sermons in all.) These readings cover all sixteen chapters of Romans.

The devotional readings are arranged into four sections: Justification by Faith, Romans 1-4; The Reign of Grace, Romans 5-8; God and History, Romans 9-11; The New Humanity, Romans 12-16.

The devotional readings are concise, very reader friendly, perfect for those who have the desire to read theology, but, not the time. The devotions have some depth, but not the depth you might expect from a commentary or heavy theological work.


At times one teacher or another has been enamored with the so-called simple teachings of Jesus and has rejected the writings of Paul as too doctrinaire, too technical, or too harsh. All we really need to do is tell people God loves them, these instructors have said. Others have maintained that it is not what we believe that matters as much as what we do. According to this perspective, the social teachings of Christianity are the heart of Christianity… Again, the problem is not that we need to know God loves us, though we often doubt that he does. Our hang-up is that we do not love God, as Luther, the pious monk, discovered. We are at war with God. In effect, we hate him; at the very least, we do not want him to rule over our lives and resent any meaningful attempts he makes to do so. Romans shows how God deals with this problem. And because it tells how God deals with this basic dilemma of human life, it necessarily also unveils the true solution to nearly everything else.


Where do most people begin when making a presentation of Christian truth? Many begin with what is often called “a felt need,” a lack or a longing the listener will acknowledge. The need may involve feelings of inadequacy; a recognition of problems in the individual’s personal relationships, work, or aspirations; moods; fears; or simply bad habits. Here is the way Paul speaks of a felt need in another letter: “For the time will come when men will not put up with sound doctrine. Instead, to suit their own desires, they will gather around them a great number of teachers to say what their itching ears want to hear” (2 Tim. 4:3). “What their itching ears want to hear” is a classic example of a felt need. In this passage the apostle warns Timothy not to cater to it. Another way we present the gospel today is by promises. Through this approach, becoming a Christian is basically presented as a means of getting something. We also commonly offer the gospel by the route of personal experience, stressing what Jesus has done for us and commending the gospel to the other person for that reason. Paul was God-centered rather than man-centered, and he was concerned with that central focus. Most of us are weak, fuzzy, or wrong at this point. Paul knew that what matters in the final analysis is not whether we feel good or have our felt needs met or receive a meaningful experience. What matters is whether we come into a right relationship with God. And to have that happen we need to begin with the truth that we are not in a right relationship with him. On the contrary, we are under God’s wrath and are in danger of everlasting condemnation at his hands. Our hope, then, is in Jesus, the Son of God. His death was for those who deserve God’s wrath. And his death was fully adequate, because Jesus did not need to die for his own sins—he was sinless—and because, being God, his act was of infinite magnitude. The place to begin for salvation is not with your own good works, since you have none, but by knowing that you are an object of God’s wrath and will perish in sin, unless you throw yourself on the mercy of the one who died for sinners, even Jesus Christ.


I want to tell you that whoever you are or whatever you may or may not have done, the gospel is for you, because it is for everybody. I want you to see that if you come to God in the way he has appointed for you to come—that is, through faith in his Son, the Lord Jesus Christ, who died for you—he will receive you and will never cast you out. Who may come? The answer is: everybody. All alike are lost in sin, and yet all alike are the objects of Jesus’s saving love. The gospel is for the very great sinner as well as for the apparently moral person. It is for the pagan as well as for the one who considers himself or herself religious. Even if you are a very great sinner, you may come. Even if you are extremely self-righteous, you may come—if you shed your self-righteousness. How may I come? You may come as you are. You are invited to come to Christ in whatever mental or spiritual attire you may find yourself in. Some come running to Jesus. Others come limping along with poor, faltering, hesitating steps. Some people come kicking and screaming. But that is all right. They may come too.