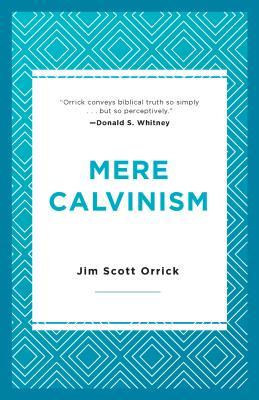 From the introduction: Early in the 1990s, I was reading a book of literary criticism by C. S. Lewis when I came across an entire page on which Lewis discusses the influence of Calvinism in the sixteenth century.

This book seeks to explain Calvinism to Calvinists. That's the book at its simplest. In the introduction he writes, "I fear that we pastors and teachers are making a serious mistake when we assume that our people and students understand Calvinism just because they call themselves Calvinists." In the first chapter he writes, "My goal in this book is to demonstrate to you, the reader, that the Bible teaches that God always does as he pleases, and that he initiates, sustains, and completes the salvation of everyone who goes to heaven."

Anyone who carefully--prayerfully--reads Mere Calvinism would find it difficult to deny that Orrick's book is saturated with the Word of God. That his arguments for Calvinism are rooted deeply, oh-so-deeply, in the Word of God. Now mere human logic or reason will never get believers to switch teams from Arminianism to Calvinism. But perhaps with a little nudge, nudge from the Spirit, the book will do just that. Not because Orrick is super-persuasive and a charismatic teacher. But because his book rightly uses the Word of God.

The first chapter introduces Calvinism briefly. The last chapter plays a "what if" and "but in fact" game with Calvinism. In between, Orrick spends a chapter on each of the five points of Calvinism. T for Total Depravity. U for Unconditional Election. L for Limited Atonement. I for Irresistible Grace. P for Perseverance of the Saints. Usually he includes several illustrations per chapter to help readers understand abstract ideas.

I did not grow up a Calvinist. I was born into an Arminian church-going family. But as I began--as an adult--studying the Word, listening to biblically sound teachers on the radio, reading theology I had an epiphany of sorts. I became an enthusiastic Calvinist who LOVED talking the five points to anyone and everyone--whether they wanted to listen or not. I have read many books on the subject. This book is in some ways a basic beginner course in understanding the five points. I didn't precisely learn anything new, but it was a good opportunity to rejoice in these doctrines once again.