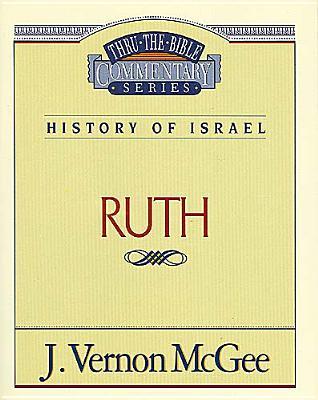 First sentence: Ruth is the story of a little foreign girl who came out of paganism and idolatry in the land of Moab.

Of all the commentaries I've read so far this one on Ruth may just be my favorite. McGee and I might disagree now and then on various things--some little, some big--but we both agree that the book of Ruth is "...a mighty midget with a mighty message."

Ruth has just four chapters--hence the midget--but those chapters reveal a great deal about redemption and our Redeemer. McGee writes, "Redemption is possible only through a Kinsman-Redeemer. God could not redeem apart from a Mediator. Since only God could redeem, it was necessary for Him to become that person." That is a mighty message indeed.

I loved his insights throughout the book. It's almost as if McGee loved playing connect the dots. For example, "Jesus Christ would never have been born in Bethlehem if the incidents recorded in the Book of Ruth hadn’t first taken place in Bethlehem."

But my favorite section--I think--is on Ruth 3. So many people today glory in making Ruth's going to Boaz at night a sinful, immoral, lusty thing when it wasn't.

I would recommend this commentary. If you're Reformed you should know there are a few places this goes free will-y. But. It's still worth reading in my opinion.

© Becky Laney of Operation Actually Read Bible
Posted by Becky at 7:57 AM