Book review: What is an Evangelical? 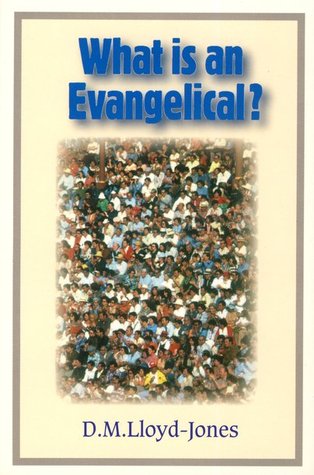 First sentence: This [Jude 1-3], as most of you realize, is a very interesting statement, for it is rather unusual in the New Testament. Here Jude is telling the people to whom he is writing that his original intention was to write a letter giving an exposition of the common salvation of the Christian faith, something similar or analogous, one imagines, to what the apostle Paul did in the Epistle to the Romans. That was what he intended to do, but he tells them he was not able to do so, that his great purpose had to be laid on one side. Why was this? It was because news had come to him of certain attacks upon the faith so that, in a sense, what he is saying is this: We have not the time, nor can we afford to enjoy the luxury of just expounding the truth and taking our time over it as we do so. A very urgent matter has arisen and all of us must now contend earnestly for the faith. And that is what Jude does and that is the reason why it is such a short letter.

In 1971, D. Martyn Lloyd-Jones gave a series of three lectures for the International Fellowship of Evangelical Students. In 1992, those lectures were printed and published for the first time. In these lectures he addresses one big question: WHAT IS AN EVANGELICAL? He answers many other questions along the way--for example, why a definition matters, what doctrines are essential to the faith and which doctrines are secondary, why denominations have a tendency to shift away from evangelical, how you can safeguard against false doctrines creeping subtly into your faith, your church, etc.

Lloyd-Jones speaks with a zealous urgency, and with good cause as time has revealed. What was true of the times in 1971 was equally true of 1992, though one could argue that the state or condition had worsened considerably. The book is still incredibly relevant and timely in 2019.

He starts his lecture at 'the very beginning.' Why do we need to define--to clarify--what it means to be evangelical? The answer goes back to Adam and Eve in the Garden of Eden. Sin. A short little word that is hardly ever popular. He argues that because the church consists of humans, of sinners--though redeemed sinners, though bound-for-glory sinners--it has a tendency to stray, to wander, to fall asleep, to stop watching and guarding, to shift and change with the times. (Also, of course, not every single person who attends church or belongs to church is a Christian, there will always be a handful of wolves clothed as sheep in our congregations.) Denominations, institutions, schools, colleges, boards, organizations, publishing companies should be careful to keep guard and stay true. Just because they were doctrinally sound when they were founded, when they were started, doesn't mean that they will never waver and lose their way.


There is a process at work, because of sin and evil, which tends to produce not only change but even degeneration...It is always a subtle and slow process...The change is almost imperceptible... The really dangerous man is the man who introduces some very slight or very subtle change. (11)

He spends some time discussing the necessary but tense balance between unity and division. It is important that there be some division--between truth and error--but it should not be taken to extremes. When the church is so focused on unity that anything and everything goes--that is a dangerous place to be. Likewise when the church is so divided over every single little thing--no matter how trivial--it's not good or healthy. The church should not spend its time, its energy, its focus on attacking one another.

The book is worth seeking out and reading.


The church, though she has been reformed, must be constantly re-formed, semper reformanda. Always reform! The church is always to be under the Word; she must be; we must keep her there. You must not assume that because a church started correctly, she will continue so. She did not do so in the New Testament times; she has not done so since. Without being constantly reformed by the Word the church becomes something very different...And we have got to do this with the term evangelical. Every generation has got to examine this for itself. (30)

We are concerned about the souls of men and women. We are here to spread the good news of salvation and to win people out of darkness into light. That is why we should be so careful about the truth, and always contend for it. (35)

We have got to keep our eye on these two sides: what men do not say, and what they add on, over and above what we regard as the true faith. (41)

Another characteristic of this evangelical is that he is a man who is always watching...and he is always watchful, of course, because the Scripture teaches him to be so. (43)

You will always find in evangelical circles that there is great emphasis on the study of the Bible, personal and corporate, that great attention is paid to expositions of the Scripture and to prayer. Prayer is vital in the life of the evangelical. (58)


© Becky Laney of Operation Actually Read Bible
Posted by Becky at 8:38 AM