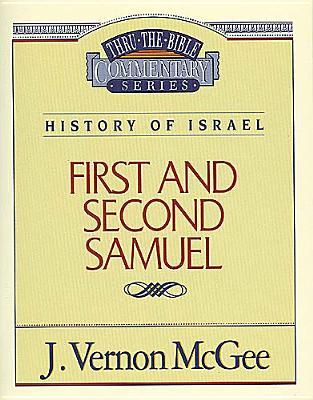 First sentence: The two Books of Samuel are classified as one book in the Jewish canon and should be considered as such.

This is one of the McGee commentaries that I reread. I am still enjoying McGee's style and approach. Though in places I do wish there was more actual commentary on the Scripture itself. There is plenty of commentary on society. I do like his tell-it-like-it-is or no-compromise-approach. But there are a few times where I think a little more knowledge of the background would make a difference. For example, I am now curious to see how other commentators deal with David and Bathsheba. McGee's approach is that David should not have been lusting or giving into temptation but that there is no excuse for Bathsheba bathing in public and flaunting her body. He suggests that she was bathing in a place where she knew that David could likely see her. She wanted to catch the king's eye--that's McGee's take on the situation.

Overall, I am enjoying McGee. It's just sometimes I'm left shaking my head in bewilderment. I do know that I disagree with him strongly on a few issues.


© Becky Laney of Operation Actually Read Bible
Posted by Becky at 8:15 AM