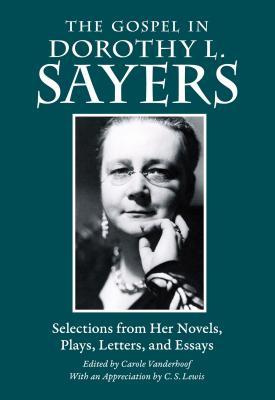 The Gospel in Dorothy L. Sayers is an anthology with dozens of excerpts from her works: her mystery novels, her radio plays, her essays, her poems. The chapters seem to be arranged somewhat thematically. There are chapters on faith, forgiveness, belief, pride, envy, greed, creativity, time and eternity, etc. Each chapter includes at least one long excerpt and sometimes several shorter ones as well. The commentary between excerpts is kept to a minimum--for better or worse. On the one hand, Sayers' words--her works--speak for themselves. On the other hand, the transition from one thing to another can be tough in a few places.

Before reading The Gospel in Dorothy L. Sayers I had a vague notion that she was Christian-ish. I remember her being quoted in a Michael Horton book and was impressed. (I love, love, love Michael Horton.) I still like a few of the quotes from her essay 'The Dogma is the Drama.' I did learn more about her, her background, her faith and theology. For better or worse. I had no idea she was Catholic and not Anglican. (I had no idea she believed in purgatory, for example) I also had no idea she was so liberal--and liberal is definitely the wrong word, I mean free and easy, loose with facts--in her radio dramas. Her life of Christ--from the excerpts included here and there sprinkled throughout the book--takes SO MANY liberties. I have a hard time seeing how the same woman who wrote "The Dogma is the Drama" could also write so many other works I struggle with accepting as even being Christian.
For example, one of the radio plays has Jesus talking with Mary and Martha and Lazarus BEFORE Lazarus' death and resurrection. Mary has been confused with the other Mary--a big pet peeve of mine. And her conversation with Jesus is just weird. But his conversation with Lazarus is just DISTURBING and bizarre. Apparently Lazarus was all angsty and suicidal.

I still love her creation, Lord Peter Wimsey, but reading this book has convinced me that I should not seek out her other books. That's not to say the book itself--edited by Carole Vanderhoof--was poorly written. The book helped clarify to me Sayers' beliefs and theology.

© Becky Laney of Operation Actually Read Bible
Posted by Becky at 8:15 AM