Book Review: The Crown and the Crucible 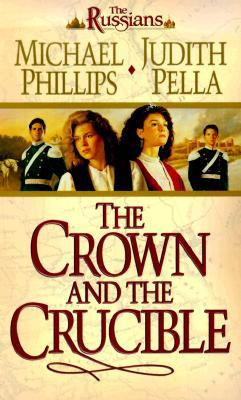 From the prologue: 368 AD The solitary figure of a man receded into the distance.

From chapter one: A solitary figure bent himself against the elements.

Premise/plot: The Crown and The Crucible is the first in a seven book historical series set in Russia. The first novel opens in the 1870s.

Yevno Burenin and his wife have five children but he dotes on his oldest two Anna and Paul. Though they've been "free" for a little over a decade, life is still incredibly difficult. The family is facing a tough choice: should they send their oldest daughter, Anna, away to be a servant in a nobleman's household? If they do, then she might be able to support herself and find her own way in the world. If they don't, then, well they'll continue to struggle to have enough food to eat. Yevno feels that Anna is his brightest child--she can read and write--and that she deserves her best chance at life. Paul is bright but perhaps not wise. He's fallen into "bad" company--revolutionary company that is promoting dangerous ideas that could overturn the government.

The novel mainly follows Anna with only the occasional return to her family--her father and brother. Anna DOES decide to leave her family and small village. And she does begin her new life as a servant--first in the kitchen as a scullery maid--and then as a lady's maid. Now if you're thinking that's a HUGE jump--it is. But Anna catches--quite by accident--the attention of the spoiled Princess. The Princess Katrina is looking to replace her bossy Nanny with a maid near her own age. So Anna starts her training under the guidance of Nina--the maid of Katrina's mother Princess Natalia.

Readers follow the lives of two families primarily--Anna's peasant family and Katrina's noble family. Also some scenes with the tsar and his family are included here and there--but they are never the main focus.

My thoughts: I LOVED, LOVED, LOVED this one. It had me at hello. Okay perhaps the prologue didn't hook me--nor did it deter me--but once I met Yevna and his family it was LOVE AT FIRST SIGHT. (And I was thankful I had taken the time to read the prologue.) I found this an addictive novel to read. I thought the writing was absolutely fantastic.

He treasured the written word almost as if he were able to read books himself. The Bible and the book of fairy tales were his two favorites.

God brings new winds to our lives to keep us from being too attached to this world, and to make us trust Him. He brings the rains, he brings the snows, then He brings back the sun. Always life is changing. No matter what happens, He will sustain us through it.

Even if from fairy tales, she knew something of the scope of human nature. She realized there were good people and evil. She knew there were choices to be made that would determine her future.

“A hundred servants!” repeated Anna. “I thought the prince had only his wife and two children!” “And no doubt they think they live as peasants because they have only twenty-five servants each!” Polya laughed.

If the army has taught me anything, it is that people are people. A man is a man, a woman is a woman—whatever their background and upbringing may have been.

The next hour passed as if it were only a few minutes. Oblivious to the frigid temperature, the son of a prince and the daughter of a peasant spoke openly and freely, as if no barriers existed between them.

It was a blessing there was no mirror. Poor Katrina had no idea how silly she looked.

“But rain is good, Papa, and troubles are not.” “How do you know that, my son?” “Is it not obvious?” “In time of flood, the rain appears as an enemy. Yet without the rains, the earth could not survive half a year. Might it not be so with the pains of life as well?

My heart is so grateful that you are here—call it a fairy tale, call it whatever you wish. I was only saying that for most Russians, except for the privileged few, their lives are a matter of fate.

Fingal smiled. “No, that is not what I mean, dear Anna. Education and wisdom are unrelated. I love education and learning and knowledge, but give me a man with wisdom any time.” “Faith does not come by education, Princess, any more than wisdom does,” said Fingal. “What do you mean?” “Faith is something you practice, something you live—not a subject you learn about, like mathematics.” “But how do you do it, if you don’t know anything about it?” “Everyone knows enough to begin,” said Fingal with a tender smile.


© Becky Laney of Operation Actually Read Bible
Posted by Becky at 8:35 AM