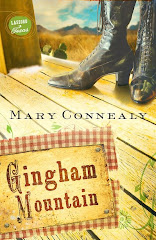 Gingham Mountain is the third book in the "Lassoed in Texas" series. The first two are Petticoat Ranch and Calico Canyon. I had not read the two previous books. And I think my reading experience would have been better if I had. That's not to say the book can't stand alone. It can. Mostly. (I didn't even realize it was a sequel to another book until about halfway through.) But I think I would have appreciated the book more if I'd known a little bit more about the characters and story going into it.

The book begins with Grant (just Grant, no last name) adopting two more kids: Charlie and Libby. He's a single man with six kids living in a four-bedroom (plus a kitchen) ranch house in the 1870s. Though she's never met him, Hannah Cartwright is furious with him. Why? She hates the idea that a single man could have adopted a child--let alone so many of them! What could a single man want with so many kids? How could he--on his own--give them a home. She's a bit self-righteous and angry...and suspicious...and stubborn...and downright silly. Having no real reason to be in town...or so you think...she becomes a school teacher because it is really the only job to be had in town.

Grant is a loving father. An orphan himself, he knows what it's like to have no one, to not belong. So he does the best he can to make each and everyone of his adopted kids (some of whom have now grown up and married) feels loved. But this new lady in town--this Hannah--she drives him crazy with her uselessness and foolishness and her attitude. The last thing he wants is to spend time with her. But she's pretty insistent. For a while, at least.

If you've read any historical romances in the past, it doesn't take a genius to figure out where this one is headed. But that is okay. If you know that the premise is about a school teacher falling in love with the father of several of her students...you know what to expect and you love where it's going. The plotting may not be the best--I found the villain and villainess (Horace and Prudence) to be unnecessary to the plot. Completely unnecessary. Minus those elements, the story made for a satisfying read. With the added sub-plots, I just found it middling.

Okay, that makes me sound cranky. I don't want to come across that way. I enjoyed Grant and Hannah's developing relationship--how it shifted from hate to love. And I enjoyed the humor. Hannah's mishaps visiting Grant's ranch--for example. It was cute and funny. I would have kept reading the book for that alone. I didn't need any extra dramatics to draw me in and keep me reading. And the drama, well, to be honest was--for me--of the eye rolling variety.
Posted by Becky at 8:31 AM