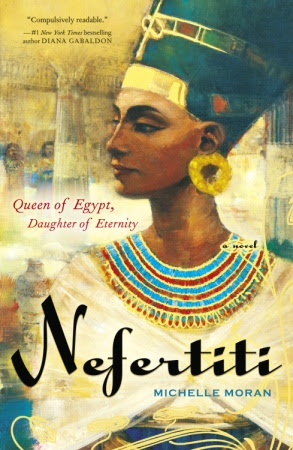 If you are to believe what the viziers say, then Amunhotep killed his brother for the crown of Egypt.

I loved this book. I mean I really really loved it. First, it's set in Egypt, Ancient Egypt. It had everything to love: large dysfunctional family, plenty of family drama, political and social drama too. Royal temper tantrums abound. Power. Who has it? Who wants it? Who 'deserves' it? Who's right? Who's wrong? Read for yourself to see. (Here's an excerpt of the prologue and first chapter.) Narrated by Mutnodjmet, the younger sister--half-sister--of Nefertiti we see the drama unfold practically firsthand.

Who's the heroine of Nefertiti? It's hard to say. This story is about Nefertiti--how much of a royal pain she was. But it's also about her sister--though less beautiful, perhaps wiser--Mutnodjmet. It's about the chaos of living in the midst of royals. The politics. The power struggles. The paranoia. Can family relationships stay the same--that of a father and daughter; that between sisters--when one becomes Queen? 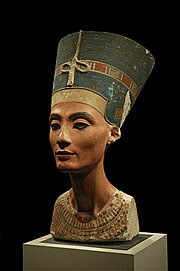 Nefertiti had her moments. There were times I absolutely hated her, I admit. But not all the time. Her husband, the pharoah Amunhotep IV (Akhenaten), on the other hand makes for a tyrannical beast. It's hard to admire a man who values human life so little. But the real star of the book, at least to me, is Mutnodjmet. Here is a character that I cared about practically from the beginning. When she was upset, I was upset. And when she finally had her moments when her dreams were realized, I cheered.

This is a book rich in detail: the setting, the characters, the descriptions. Yet never once did the book feel like a burden. It was a book I hated to put down, and loved to rush back to. If you are interested in Ancient Egypt, or in historical fiction, or in historical romance...or if you just want a really outstanding book to savor with intricately drawn characters and a fast-paced plot...pick up Nefertiti.

I am so glad that you enjoyed this book. The Heretic Queen is really good too, and it is an even bigger bonus that Michelle Moran is so accessible to her fans as well.

I've never had any interest in Egyptian historical fiction, but you made this sound so... well... good! I'm off to enter the contest...

Ok, ok!! I'll pull it out of the TBR stack! You've made me want to push this one closer to the top.

Great review. I've heard wonderful things about this book. I really need to read it.

Loved your review, I also raved about Nefertiti and The Heretic Queen in my reviews, I can't wait for Michelle Moran's next one.