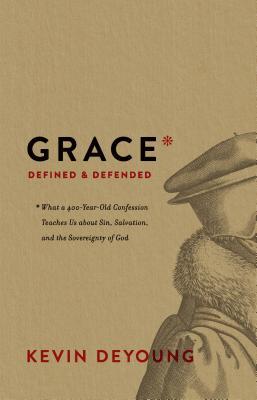 Grace Defined and Defended: What a 400 Year Old Confession Teaches Us About Sin, Salvation, And the Sovereignty of God. Kevin DeYoung. 2019. Crossway. 144 pages. [Source: Review copy]

First sentence: The first car I owned was a 1995 Dodge Neon, and it was a lemon.

The 400-Year-Old Confession of which DeYoung speaks is none other than the Canons of Dort. If you're thinking...didn't you just review a book about the Canons of Dort?....you'd be right. I did. That book was by Robert Godfrey and titled  Saving the Reformation. (It was published by Reformation Trust.)


Both books stress that Calvinism is MORE than the acronym TULIP. Both books stress the relevance of the Canons of Dort to the Christian faith and the importance of holding to doctrinal truth. Both books include the text of the Canons of Dort and provide commentaries for the articles. (DeYoung's book does not provide exposition of the rejections however.) Both books provide a history lesson. DeYoung's book provides a glossary of key terms, key people, key writings BEFORE the history lesson. (I thought this was a nice touch).
I loved how DeYoung's book was filled with I-didn't-know-that facts. For example, "Before the Synod of Dort conducted its business, each member took a solemn oath saying that “I will only aim at the glory of God, the peace of the Church, and especially the preservation of the purity of doctrine.” They ended with a prayer: “So help me, my Savior, Jesus Christ! I beseech him to assist me by his Holy Spirit.”

Wouldn't it be wonderful if believers today were as passionate and zealous for doctrinal truth?! Can their be true [genuine, authentic] unity without purity or truth?

Most of this book focuses on the Canons of Dort. As I mentioned earlier, it includes the ARTICLES of the Canons of Dort within the text itself. These are broken down, of course, into their five main points. DeYoung provides exposition or commentary for these articles. It does include the rejections for each of the five main points, but only as an appendix. He does not provide commentary for the rejections.

Here are DeYoung's summary of the Five Points Held by the Arminians:
Here are some of my favorite quotes from his commentary:


The question is not simply, “Why do some people get passed over?” but, “Why should anyone be saved?” We are all deserving of punishment and death. It is only by God’s grace that any of us receive eternal life.

Although the Canons of Dort are rigorously careful and theologically precise, this does not mean they are pastorally irrelevant. In fact, the driving force behind all their definition and all their defending was a desire to help struggling Christians.

God doesn’t condemn people for being reprobate. He condemns people for sin and unbelief, from which God, according to his good pleasure and sovereign grace, has purposed to rescue only the elect.

We often think of free will as being the opposite, in some sense, of God’s sovereignty. But strictly speaking, the freedom of the will has to do with whether the will is in bondage to sin. Prior to the fall, human beings had free will (in this sense), but now our wills, apart from regeneration, are bound to sin. What was holy and pure has become dark, futile, and distorted. Every part of us—mind, will, heart, and emotions—has been corrupted by the fall.

Sin is not just something we do when we follow bad examples; it’s who we are in our very nature.

The doctrine of perseverance does not negate repentance; it leads us to repentance. The grace that saves a wretch like me is also the grace that will lead us home.

I would definitely recommend this one. It was a great read. I am glad I read both books, and I'm glad that I did so within a week of each other--even if I didn't set out to do so!

© Becky Laney of Operation Actually Read Bible
Posted by Becky at 8:45 AM