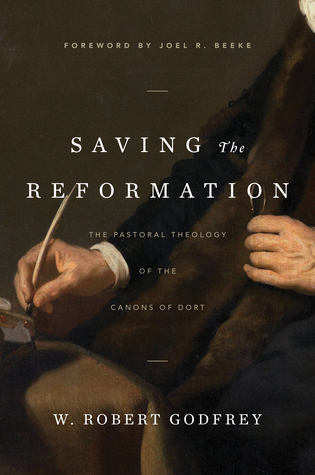 First sentence from the foreword: Reformed confessional theology is a statement of faith set within a story of faith. If we neglect the church’s historic statements of faith, we end up with mindless and spineless Christianity—more fit to drift like a jellyfish than to swim against the stream of this world. (Joel Beeke)

First sentence from the introduction: Most meetings of church assemblies are neither interesting nor significant.

The canons were written "as a specific response to the Arminian challenge against salvation by God’s grace alone—specifically, the objections to Reformed doctrine expressed in the five points of their Remonstrance."

Godfrey does a good job placing the Canons of Dort in context. Without establishing context--genuinely elaborating on the who, why, how, where, when, and what--one would never fully understand or appreciate the Canons of Dort and/or the Synod of Dort. This is what Godfrey does in the first part of Saving the Reformation. (The appendices provide further details for establishing context. For example, one appendix provides a new look at Arminius. Another appendix provides a detailed outline for the Canons of Dort. There are five appendices in all.)

In the second part of Saving the Reformation, Godfrey provides readers with a NEW TRANSLATION of the Canons of Dort. This translation--in his own words--was written to make it easier for readers to understand. Godfrey breaks long Latin sentences into shorter English sentences.

In the third part of Saving the Reformation, Godfrey provides exposition or commentary on the Canons of Dort.

Believers may not have heard of the Synod of Dort or the Canons of Dort. But perhaps they've heard of the FIVE POINTS OF CALVINISM. The "five points of Calvinism" originated with the Canons of Dort. There were "five points" not because that number sums up the whole of Calvinist thought or doctrine but because the Arminians in their Remonstrance used FIVE POINTS. This was a reaction--a rejection--of those specific Arminian errors. Godfrey points out, "Calvinism is summarized in full confessional statements such as the Heidelberg Catechism, the Belgic Confession, and the Westminster Confession of Faith. To be very accurate, Calvinism does not have—and never has had—five points."

I really enjoyed reading this one. I absolutely loved the second part. At first I was determined to highlight all the good parts, all the parts where I wanted to shout AMEN or PRAISE THE LORD. I soon determined that to do so would be to nearly underline it in its entirety. The commentary was also excellent.


© Becky Laney of Operation Actually Read Bible
Posted by Becky at 8:13 AM