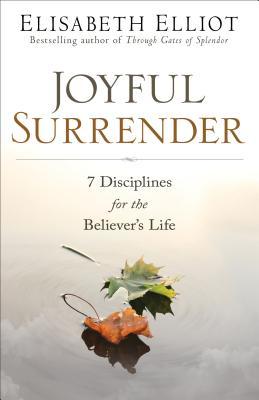 First sentence: Early in the morning I sit on a window seat in a beautiful stone cottage on a remote hilltop in south Texas. It is springtime.

Elliot selected seven (mostly spiritual) disciplines to focus on in this one which was originally published in 1982. Those seven disciplines are: body, mind, place, time, possessions, work, and feelings. She defines discipline as 'the believer's answer to God's call.'

When Elliot stays on task, she offers some good insights to living the Christian life. When Elliot gets off task--which is more often than I'd prefer--she tends to ramble. For example, she often rambles on and on about where she is when she's writing a specific chapter. Her insights into where she is, what time of day it is, her current view, her feelings of the moment, etc--these don't offer anything of worth, in my opinion. Though I suppose you could argue that they reveal her humanity. (But do we really need a reminder that authors are human and have lives to live?)

Before she settles down to her subject--disciplines for living well--she seems to have several chapters about free will. (Six-ish chapters to be exact). Before reading this one I'd never considered if Elliot was "Reformed" or not. (I am Reformed.) There were some iffy statements that could definitely be construed as NOT Reformed or "free will-y" as I like to say. But I'm unwilling to say for sure--context, context, context always matters. Perhaps she is speaking not of a call to salvation but of a call to live holy lives. If she's speaking of sanctification and sanctification alone perhaps there is (some) truth in what she writes. If she is speaking of salvation, then she's definitely off the mark. It isn't as simple as she's out and out wrong. (It is that simple sometimes with some teachers/preachers/writers. But usually not. Usually there is a mingling of right and wrong, true and false, wisdom and foolishness.)


God calls me. In a deeper sense than any other species of earth-bound creature, I am called. And in a deeper sense I am free, for I can ignore the call. I can turn a deaf ear. I can say that no call came. I can deny that God called or even that God exists. What a gift of amazing grace--that the One who made me allows me to deny His existence! God created me with the power to disobey, for the freedom to obey would be nothing at all without the corresponding freedom to disobey. I can answer no, or I can answer yes. My fulfillment as a human being depends on my answer, for it is a loving Lord who calls me through the world's fog to His island of peace. If I trust him, I will obey Him gladly. (12)

This much we know: a God who is sovereign chose to create a man capable of willing his own freedom and therefore capable of answering the call. (15)

We are required to take the risk, move, trust God, make a beginning. This is what Jesus always asked of those who came to Him for help of any kind. Sometimes He asked them to state their case, to affirm their desire, and often to do something positive before He could do His work. There had to be evidence of faith, some kind of beginning on their part. (19)

The grace makes it possible; the Scripture points the way; the Spirit inspires--but there is one thing more. Yet still there is something for man to do, and it is the greatest thing any man can ever do. It is put his full trust in the living God. Faith is the only thing required. (28)

God, the causer of it all, also causes us to cause. The self-determining power of the individual is part of the ordered predestination of God and of the necessity felt by His love to endow the man with a freedom like His own if He expected man to respond to His own. (34)

God does not coerce us to follow Him. He invites us. He wills that we should will--that is, He wills our freedom to decline or to accept. (37)

In writing of the disciplines, she's not out to make easy friends. Some of what she writes is on the harsher side. For example, in her chapter on discipling the body she makes some harsh-sounding statements about weight. One can easily get the impression that in Elliot's mind to be fat is to be sinning against the Lord. It isn't just gluttony she addresses but also sloth.

But often she does have helpful/truthful insights.

A renewed mind has an utterly changed conception, not only of reality, but of possibility. A turn away from the kingdom of this world to the Kingdom of God provides a whole set of values based not on the human word, but on Christ's. (62)

Reality is often evil. There is a common belief that a frank expression of what one naturally feels and thinks is always a good thing because it is honest. This is not true. If the feelings and thoughts are wrong in themselves, how can expressing them verbally add up to something good? It seems to me they add up to three sins: wrong feeling, wrong thought, wrong action. (64)

The work of God is appointed. What was given to the Son to do was the will of the Father. What is given to us to do is also His will. There is always enough time to do the will of God. (100)

Feelings, like thoughts, must be brought into captivity. No one whose first concern is feeling good can be a disciple. We are called to carry a cross and to glorify God. (133)

It is the will that must deal with the feelings. The will must triumph over them, but only the will that is surrendered to Christ can do this. (141)

Our love will be shown by obedience, not by how good we feel about God at a given moment. (143)

What I ought to do and what I feel like doing are seldom the same thing. (143)

This one definitely kept me thinking.


© Becky Laney of Operation Actually Read Bible
Posted by Becky at 8:42 AM