Book Review: A Surprise for Lily 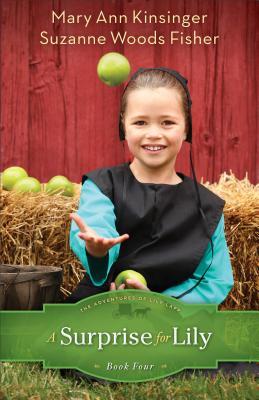 First sentence: All morning, Lily hurried to pull weeds in the garden.

A Surprise for Lily is the fourth and final book in the series by Mary Ann Kinsinger and Suzanne Woods Fisher. I knew going into it that it was the last--but it was still sad to come to the end.
Lily Lapp has matured so much since the first book. Now she's in fifth grade and experiencing the highs and lows of growing up. She's still struggling with a few of her classmates; but she's doing it with a certain amount of grace and dignity. Most of the time.

It is just a treat to spend time with the whole Lapp-Miller family. I love them all. I even love to "hate" a few of the characters. (Think Nellie Oleson.)

I think it would be awesome if the authors decided to write a young adult or even adult series starring an older Lily. Just enough time has passed--in the real world--for Lily to mature into a young woman who might just be interested in boys and courting and marriage and settling down. Would Aaron Yoder still be a PEST and NUISANCE? Part of me really wants these two to get together.


© Becky Laney of Operation Actually Read Bible
Posted by Becky at 8:23 AM