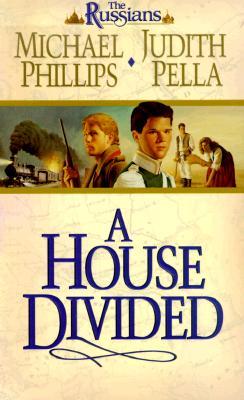 First sentence: The garden was once again still.

A House Divided is the second book in the series, The Russians by Michael R. Phillips and Judith Pella. Some series books are capable of standing alone, however, I'm not sure this is the case with A House Divided. All the characters--perhaps with the exception of a few minor characters, mostly rebels--were first introduced in the first book The Crown and the Crucible.

Anna, our heroine, is still a loyal maid to Katrina. Katrina is still head over heels in love with her brother's best friend, but when she can't have him...she starts to look elsewhere for love and attention. And the consequences for her poor judgment may be long-lasting. Anna's brother, Paul, is mixed up with a REALLY bad set--the rebels who think nothing of sacrificing innocent lives--civilians--in their ongoing quest to kill royalty and nobles. If their father knew, oh, the heartbreak that it would cause. Speaking of which, Anna does have to go home to help care for her father in his illness...and she's joined by another....one who wants her father's blessing on their marriage. She'll return to her post as maid, but, her situation may be changing. Katrina will be wanting to bring her along to her new household...

The Russians is like a soap opera in book form. It has dozens of characters, differing points of view, conflict and tension, and above all else DRAMA. But it's not all drama all the time. Anna and her father are deeply devoted to God. They have testifying to do...let the redeemed of the Lord say so!

I really am loving this series so far. Sometimes I want to yell at the characters--probably why it reminded me of a soap opera. But overall, it's just an enjoyable treat and a good reminder of why I love historical fiction.