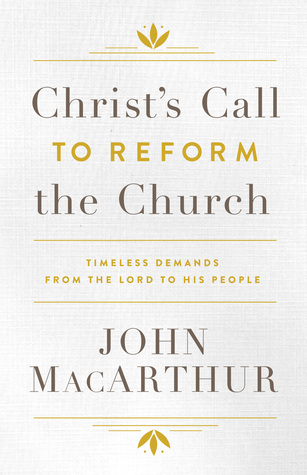 First sentence (from the introduction): In the book of Revelation, Jesus wrote seven letters to cities in Asia Minor. He didn't write them to city hall; He wrote them to the church. Let that sink in moment.

First sentence from chapter one: Have you ever heard of a church that repented? Not individuals, but an entire church that collectively recognized its congregational transgressions and openly, genuinely repented, with biblical sorrow and brokenness? Sadly, you probably have not. For that matter, have you ever heard of a pastor who called his church to repent and threatened his congregation with divine judgment if they failed to do so? It's not likely. Pastors today seem to have a hard enough time calling individuals to repent, let alone calling the whole church to account for their corporate sins.

MacArthur's sermon text--if you will--is Revelation 2 and 3. In these seven letters to seven different churches, Jesus is calling for--in fact demanding--that the churches repent. Repentance hasn't grown in popularity through the centuries, but its need has not lessened either. What can believers--what can churches--learn from studying these letters? How are our churches like the ancient ones? Do we face the same struggles? the same temptations? the same judgement if we do not repent? Have we forgotten that the Bible was written with authority and should be read as such?

In the introduction, MacArthur points out that the church has never been commanded to go to war with the culture, or to legislate morality. He writes, "The will of God is not that we become so politicized that we turn our mission field into our enemy...It's futile to think the solution to our culture's moral bankruptcy is a legislative remedy. There is no law that can make fallen sinners righteous" (12).

In the first chapter, MacArthur introduces key topics that will be discussed throughout the book: worldliness, sin, compromise, tolerance, repentance, judgment. He examines what happens when churches compromise with the truth--with the revealed Word of God--and choose tolerance, peace, and unity instead. He briefly mentions the Reformation and Puritan movements before addressing contemporary issues facing the church. Did the ancient church have it easier? Or did they face the same temptations and struggles? Has Satan used the same tactics against the church since day one? Are our "new problems" really ancient ones?

In the second chapter, MacArthur takes a closer look at Revelation 1. Since the majority of the book is focusing on Revelation 2 and 3, this chapter is providing orientation and context for understanding and appreciating the book as a whole.

In chapters three through nine, MacArthur discusses the seven churches--Ephesus, Smyrna, Pergamum, Thyatira, Sardis, Philadelphia, and Laodicea--and closely examines the Lord's messages to them. This is the heart of the book. Readers will learn more about these ancient churches and their problems. Readers will be reminded of the relevance of these urgent, passionate messages. Jesus is still calling his church to repent.

In the tenth and final chapter, MacArthur revisits the five solas of the Reformation and discusses the church's need to reform or return to reform. The Reformation should not be thought of "as over."

This was a great read.

© Becky Laney of Operation Actually Read Bible
Posted by Becky at 11:37 AM