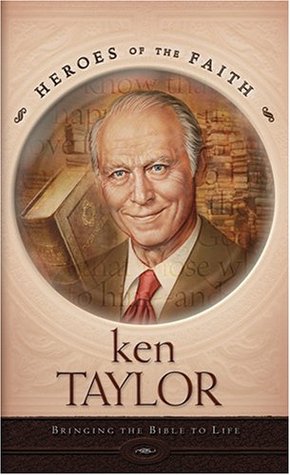 First sentence: "Why, Kenneth has always been a Christian," Ken's mother said to a friend. He and his older brother, Douglas, well they have always believed."

I enjoyed reading this children's biography of Ken Taylor. The book focuses on his life, his family, his work, his career, his legacy. He is perhaps best known for writing a bible story book for children, writing a paraphrase of the entire Bible, and starting a publishing house. I speak, of course, of The Bible in Pictures for Little Eyes (1956), The Living Bible (1971) and Tyndale Publishing House.

Growing up Ken Taylor struggled to understand the King James Version. He could make sense of the gospels and the book of Acts. But when it came to understanding and appreciating other parts of Scripture--for example, Paul's letters--he was confused and frustrated. He knew that not everybody struggled with this--his brother Doug, for example, seemed to love all of Scripture. But he did. But he grew up, went to a Christian college, entered seminary. But again as a father this time he noticed a need. If people are to love the Word, treasure the Word, live the Word...it is imperative that they first understand it. There needed to be a Bible simple enough to be understood. His paraphrase started out as an experiment and an act of love. He opened up the Bible, read a chapter--I believe it was from 2 Timothy--and set out to paraphrase its meaning verse by verse. He shared this experiment with his family. It seemed to be a good idea. But it would also be a time-consuming one. A project requiring years of hard work and revision. And then there was the whole getting it published and stocked into bookstores aspect of it....

I learned a good deal about Ken Taylor reading this one. It was based on his own autobiography published in 1991. This explains why it was able to include so many personal details. The book also shares reactions to the Living Bible. (It was first published in parts: Living Letters, Living Prophecies, etc.) One thing that helped establish the Living Bible was the fact that Billy Graham supported it. He offered to give away free copies of Living Letters to those that wrote in and requested it. This success helped encourage him to keep going and paraphrase the entire Bible.

© Becky Laney of Operation Actually Read Bible
Posted by Becky at 8:34 AM