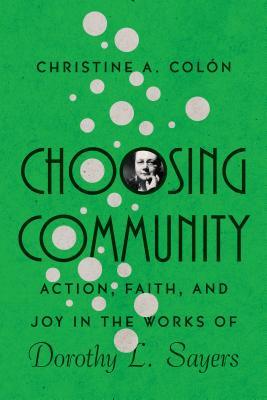 First sentence: IN THE NINE TAILORS, one of her most famous detective novels, Dorothy L. Sayers discusses the “art of change-ringing”—an art where a group of bell ringers gather together in a church’s bell tower “to work out mathematical permutations and combinations” on the bells.

In the first essay, "Dorothy L. Sayers’s Vision for Communities of Action" the focus is on Peter Wimsey and HIS community. He does not solve cases alone. Far from it--he's not an egotistical genius in isolation. He relies on others within the community--men and women. It isn't that he allows others to help him. He would find it impossible to solve cases without others helping him. Every person is vital--essential. Sayers also breaks the formula of the traditional detective novel. Her mystery novels became progressively more and more complex. The "worlds" she creates are realistic--oh-so-human. The characters she creates have realistic problems that correlate to the real world. Her mystery novels can be thought-provoking and not mindless escapes. Her novels aren't tied up in neat little bows with the world returned to cozy innocence. The real world doesn't work like that and neither do her novels. Colon concludes, "Sayers, by moving beyond traditional conventions, has deepened the artistry of her works and created a more realistic view of evil and a more complex view of the (limited) power of the detective."

The novels examined closely within this essay are The Nine Tailors, The Unpleasantness at the Bellona Club, Murder Must Advertise, and Strong Poison.

In the third essay, "Dorothy L. Sayers’s Vision for Communities of Joy" the focus is on Harriet Vane's character arc. When the character is first introduced in Strong Poison, she is without a community. She is isolated, alone, distrustful of others. She is without joy or hope. But this isn't the last we see of her. Harriet Vane appears in three additional novels--and her character develops with each additional novel. Colon discusses Strong Poison, Have His Carcase, Gaudy Night, and Busman's Honeymoon. Vane's rejoining the community is gradual perhaps but ultimately healing.

In the second essay, "Dorothy L. Sayer's Vision for Communities of Faith" the focus is not on the local Christian church but on the community of the theatre. Colon spends time discussing or analyzing three of Sayers' dramas: "The Zeal of Thy House," "The Emperor Constantine," and "The Just Vengeance." Colon also briefly discusses a few of Sayers' essays and her new translation of Dante's Divine Comedy.

After each essay, there is a response. I wasn't overly impressed by the first and third responses--particularly the third one. But I really LOVED the response by Andy Mangin about the theatre.
Here are a few of my favorite quotes from his response.
I would definitely recommend this collection of essays. It also references a few of her letters. I had no ideas she was good friends with C.S. Lewis. This book includes photographs of a few of these letters. And there are illustrations. It's a hoot!

Quotes from the essays:

Throughout her life, Sayers immersed herself in groups that would not only help to nurture her own individual creativity but also allow her to work with others to achieve more as a group than she could individually. She recognized the potential power of people working well in community and utilized it in her own life and career.

Sayers recognized the potential for detective fiction to be more than escapism. In her essay “Gaudy Night,” Sayers describes the process she went through as she tried to move from the simple formula of a typical detective puzzle to a detective novel of manners: a novel that retained the intrigue of the puzzle but also portrayed a realistic society with complex characters and themes that would compel readers to reflect on the issues of the novel long after they closed the book.

By investigating the trajectory of her novels, we can begin to see how Sayers asks her readers to rethink the simplistic portrayals of the community and the detective that are part of the traditional formula for mystery novels, encouraging them to reflect on the role that each individual might play in the process of maintaining a healthy community.

In a number of her later novels, however, Sayers begins to challenge these simplistic views of community and evil. In these novels, the communities are not essentially peaceful and good nor are the problems easily resolved simply by finding the true villain. Here, evil—whether social or moral—pervades the community, making it much more difficult for the brilliant detective to bring the community to a state of innocence. For example, in The Unpleasantness at the Bellona Club (1928), Sayers initially seems to follow the traditional formula: a greedy villain throws the community into chaos by murdering an elderly man in order to gain access to a substantial inheritance, and Peter restores that inheritance to the appropriate people by solving the case.

Rather than presenting comforting endings in which the detective by solving the case also resolves the problems that threaten the community, Sayers illustrates that there are essential problems in the worlds of these novels that transcend the detective’s power.

And the fact that the worlds of these novels so closely mirror the world of Britain in the late 1920s and early 1930s, when the novels were written, suggests that Sayers is also asking her readers to move beyond these fictional realities to the challenges facing their own world. But if the detective cannot solve all these problems, who can?

In her later novels, Sayers develops this idea even further as she increases the number of friends who help Peter solve his cases, eventually demonstrating that the problems of society might be addressed more effectively by a community of individuals actively pursuing their unique vocations. She does this most fully in her novel Strong Poison (1930).

Sayers did not write her detective fiction intending to present a theological perspective on community. But as an artist trying to do her proper work with integrity, she began to recognize that preserving the complex communities she was beginning to create within her novels required more than simply the brilliance of Lord Peter Wimsey. It required Miss Climpson’s insights into human nature and her ability to fake a séance just as much as it required Inspector Parker’s plodding police work, Freddie Arbuthnot’s knowledge of the stock market, Marjorie Phelps’s insight into the artistic mind, and Miss Murchison’s secretarial skills. By focusing on their unique work and taking action when needed, they all ended up serving the wider community. Their skills came together with everyone else’s, ultimately providing a powerful model of the balance between individuals and community that Sayers hoped would help transform her own society.

As we will soon see, an arch plays an important role in the plot of The Zeal of thy House. But in addition to that, I believe the arch serves as a powerful symbol of Sayers’s developing ideas about the components needed to maintain healthy communities of faith: committed individuals who are willing to participate in the work of bearing one another’s burdens (like the stones in an arch), and a centering doctrine that acts like a keystone to hold those individuals together.

With the outbreak of World War II, Sayers, along with many other Christian intellectuals, began to reflect on the ways that the supposedly Christian society of Great Britain might not be prepared for the challenges of the war. In “Creed or Chaos?,” which was delivered as a lecture in 1940, Sayers characterizes the war as “a life-and-death struggle between Christian and pagan,” and she declares that “at bottom it is a violent and irreconcilable quarrel about the nature of God and the nature of man and the ultimate nature of the universe.” Sayers contends that what is “terrifying and tremendous” about the war is that it is based not on a “failure in Germany to live up to her own standards of right conduct” but rather that “what we believe to be evil, Germany believes to be good.”

For Sayers, the fundamental issue at stake in the war is the truth of Christianity. She is therefore adamant that those who claim to be Christians must be fully grounded in the doctrines they supposedly believe. In fact, Sayers implies that unless the people of Britain truly understand Christian doctrine, they run the risk of winning the battle against Germany but losing the war against paganism: a war they do not even realize they should be fighting.

Throughout her essays, Sayers warns her readers that unless they hold to the truth of doctrine as the keystone of Christianity, the arch of their faith cannot stand. Sayers, however, recognizes that a lack of doctrinal understanding is not the only threat that Christians must address. She also focuses on the difficulties Christians experience when trying to live out their faith together in community.

To return to the image of the arch, the challenge for communities, then, is not simply the lack of a keystone but also the internal divisions that reveal the stones’ flaws that would compromise the arch’s stability even with the keystone in place. Throughout her essays, Sayers repeatedly highlights these dangers that she believes threaten to destroy Christianity; but, as we will see, it is in her religious plays that she fully explores the implications of these ideas about doctrine, evil, and community as she presents the various challenges of individuals attempting (and repeatedly failing) to live well in their communities of faith.

Theater, for Sayers, has all the qualities that she desired to see in the church, so it seems fitting that she uses drama to explore the challenges facing communities of faith. With these plays, Sayers not only reflects on the qualities that communities of faith need in order to thrive, but she also enacts these qualities within each of the communities that came together in making the productions. Sayers may have experienced her ideal community of faith much more fully in the theater than in the church, but she never abandoned the idea that the church could become a more effective community of faith.

© Becky Laney of Operation Actually Read Bible
Posted by Becky at 8:37 AM