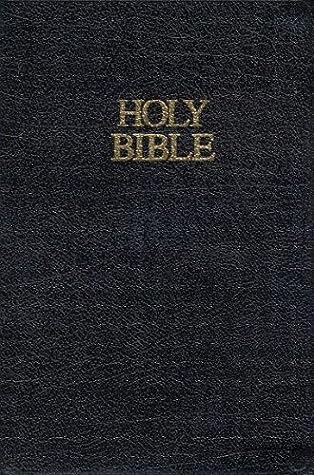 Holy Bible. Revised Standard Version. 1952/1980. 1100 pages. American Bible Society. [Source: Bought]
First sentence: In the beginning God created the heavens and the earth. The earth was without form and void, and darkness was upon the face of the deep; and the Spirit of God was moving over the face of the waters.
I have two pew Bibles in the Revised Standard Version. I decided to be "brave" and mark up one of them. After all, I bought it second hand at a charity shop for just a few dollars. And I have nicer versions that I can read if I ever want a "perfect" "unmarked" "fresh" read.
It was a joy to read the Bible with marker in hand. YES, marker. Fine tip to be sure--but a marker, a plain, ordinary marker. Because the Bible was printed at a time when just about any and every Bible had thick pages and bleed through was practically nonexistent, you could use marker with just the barest, barest bit of bleed-through. (Except for a few times when ink decided to blob done for whatever reason, but that didn't happen 98% of the time.) I didn't have a color coded system. I used a dozen or so colors--my theory being that I would pick one color to use for that day's reading. If different colors are used in the same book of the Bible--it reflects my multiple sittings with the Word.
I do love the RSV. It would be a contender for my top three IF it only used propitiation instead of expiation.
The pew Bible was black letter.
The font size was small--but might be considered large print the way publishers are treating readers today. The Bible is light weight enough that one can easily read it anywhere.
© Becky Laney of Operation Actually Read Bible
Posted by Becky at 3:56 PM