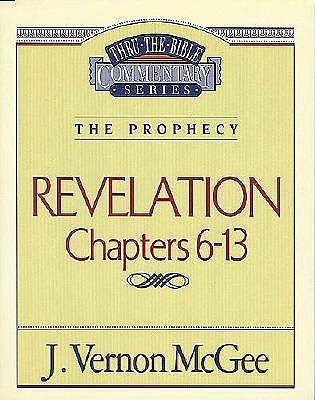 Thru the Bible Commentary Series: Revelation 6-13. J. Vernon McGee. Thomas Nelson. 192 pages. [Source: Bought]
First sentence: The sixth chapter of Revelation is the great watershed, the great divide, of the Book of Revelation. Here is a division that is all-important.
I am reading the Bible in 2020 using the daily M'Cheyne (Robert Murray M'Cheyne) plan. I thought it would add a layer of substance to in addition to the four chapters a day, to also read commentaries for those chapters. For that I am using Matthew Henry's Commentary on the Whole Bible. But the plan goes through the New Testament (and Psalms, I believe) twice. So now that I've finished Henry's commentary for the New Testament, I am tackling the New Testament commentary section of J. Vernon McGee's series.This is not my first time reading J. Vernon McGee. I've read probably thirty or so of his commentaries. Most recently Revelation 1-5.
I really am LOVING McGee. This has been the best idea--to correspond my Bible reading with commentary reading.
This is NOT my first time reading McGee's commentary on Revelation. In fact, I'd say that his commentary on Revelations was one of the first of his to read way back when. (The only one that might have come first was Isaiah or Jeremiah?)
The second volume covers chapters six through thirteen. These are very intense chapters! The focus is on the Great Tribulation. McGee's approach is not to read our present into the interpretation of the Scripture. So you won't see McGee arguing that these Scriptures are being fulfilled in our days. He has definite ideas on what is important and what is less important. On what it is necessary to know and what is impossible to know.

What I have come to appreciate about the Thru the Bible commentaries is that even when I don't agree with every single little detail, every little point or insight made by McGee, I still find it of benefit overall. I enjoy his writing style, his accessibility, his enthusiasm.

Antichrist does not appear as a villain. After all, Satan’s angels are angels of light. He is not going to have horns or cloven feet. Rather, he is going to be the most attractive man the world has ever seen. They will elect him, and the world will acclaim him because he has come in his own name. But when he takes over, it sure is going to be bad for the world.

Death evidently has an all–inclusive, three–fold meaning that we do not ordinarily attach to it. We think of death as referring only to the body. (1) This is physical death, and it refers only to the body. It comes to a man because of Adam’s sin. (2) Then there is what is known as spiritual death, which is separation from, and rebellion against, God. We inherit a dead nature from Adam; that is, we have no capacity for God and no desire for Him at all. (3) Finally, there is eternal death, which is eternal separation from God. Unless a man is redeemed, this inevitably follows. This is the second death that we will find later on in Revelation 20:14.

Since this book is the last book of the Bible, the only requirement is to have a working knowledge of the sixty–five books which go before. Then you will find that this book makes a great deal of sense and is quite logical.

Then, does anybody get saved in the Great Tribulation period? My friend, I believe that there will be a greater company saved in that period than in any other seven–year period in the history of the world.

A great company is going to be saved, and this reveals that these judgments will accomplish a purpose for God. It will cause multitudes to turn to Him in this period, and it will cause another multitude to turn against Him. It is just like the effect of the sun shining down on a piece of soft clay. What will the sun do to the clay? It will harden it. What would be the effect of that same sunlight upon wax? It would melt it. The sun has the opposite effect upon clay and wax. The judgments of God are the same. In our lives as believers, when trouble comes to us—I’ve discovered this in my own life—it will either draw us to God or drive us from Him.

The Book of Revelation is the last book in the Bible because a working knowledge of the sixty–five books preceding it is the basic requirement for an understanding of its vivid language.

You do not interpret Revelation by itself; there are sixty–five books before it.

That all of God’s men are immortal until God is through with them is a wonderful comforting thought for today. And when He is through with you, He will remove you from the earth.

© Becky Laney of Operation Actually Read Bible
Posted by Becky at 10:54 AM