107. An Exposition of Hebrews 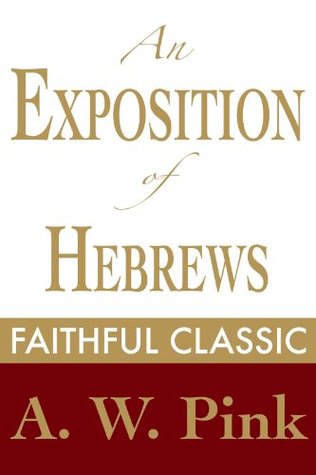 An Exposition of Hebrews. Arthur W. Pink. 1954/2012. 1428 pages. [Source: Bought]
First sentence: Before taking up the study of this important Epistle let writer and reader humbly bow before its Divine Inspirer, and earnestly seek from Him that preparation of heart which is needed to bring us into fellowship with that One whose person, offices, and glories are here so sublimely displayed.
An Exposition of Hebrews is a commentary on the book of Hebrews by Arthur W. Pink. Goodreads gives the publication year of 1954. I'm not confident that this is the right year--but it might be.
Pink provides commentary on every single verse of Hebrews. He also shares insights from other preachers/teachers/commentators as appropriate. Hebrews has thirteen chapters. And each chapter of this commentary tackles one--perhaps two--verses. Some verses have multiple chapters. It isn't unusual, for example, to have chapters broken into two or three parts all handling the same verse or two.
Hebrews is a complex book. That isn't an exaggeration. It is one of the weightiest books of the Bible. It almost demands a thorough working knowledge of the books of the Law and the legal/priestly aspect of Old Testament faith. But it focuses primarily on Jesus Christ. It has much to say about his life, his death, his resurrection, his ascension, and his current work of interceding for the saints. This book is theologically rich and intellectually demanding. That is the book of Hebrews. The commentary is in some ways intimidating, but it is also readable--if one sticks with it and takes it bite by bite. Much like the old saying, how do you eat an elephant--one bite at a time.
I didn't agree 100% with every single sentence. As I mentioned earlier, it is a WEIGHTY book of the Bible that covers a good many doctrines of the faith. And sometimes Pink's interpretation of a verse differs--in varying degrees to other interpretations that I hold closer to. That isn't to say that there's any one section of his commentary that I find myself in strong, overwhelming disagreement with.
Quotes:
© Becky Laney of Operation Actually Read Bible
Posted by Becky at 11:31 AM