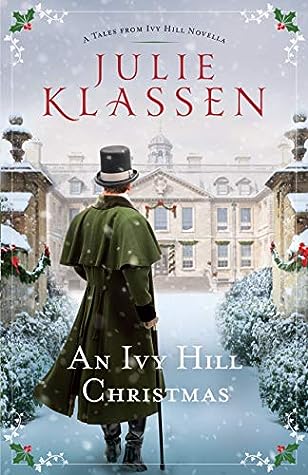 An Ivy Hill Christmas (Tales from Ivy Hill) Julie Klassen. 2020. 224 pages. [Source: Review copy]
First sentence: Walking past a linen draper’s, Richard Brockwell surveyed his reflection in the shop windows with approval. He cut a fine figure, although he said it himself.
An Ivy Hill Christmas revisits some of the families first introduced in Klassen's earlier Ivy Hill series. Richard Brockwell, the hero of this particular title, is going home for Christmas. Not particularly because he's family-oriented and loves Christmas, but, because he's not on good standing with his family and his 'freedom' to live a life of leisure is being threatened. (He lives in London and not near Ivy Hill). There is a house party going on--gathering single men and women together in hopes that matches will be made. Richard is bringing with him a publisher friend, David Murray, and a dog, Wally.
The heroine, Arabella Awdry, is one of the guests at the house party. She knows one thing: Richard Brockwell is TROUBLE, TROUBLE, TROUBLE. She's not going to be tempted--not even a little bit--to socialize with him and become friendly. But how well does she really know him?
I enjoyed this historical romance. I haven't reread the Ivy Hill books. It did take me a few chapters to reorient myself to the neighborhood. I am sure there are still things I missed because it's been a while since I read the earlier books. But. I enjoyed this one. I liked the characters and the setting. It was a good read.
© Becky Laney of Operation Actually Read Bible
Posted by Becky at 11:01 AM