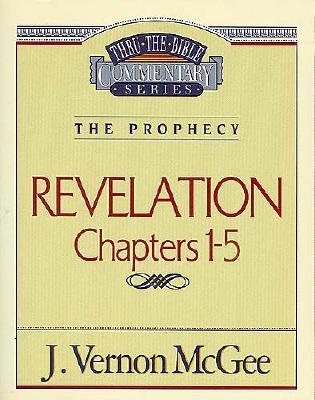 Revelation 1-5. (Thru the Bible #58) J. Vernon McGee. 1995 (published 1979???) 152 pages. [Source: Bought]
First sentence: In the first division of this book we see the person of Christ. We see Christ in His glory and position as the Great High Priest who is in charge of His church. We see Him in absolute control. In the Gospels we find Him meek, lowly, humble, and dying upon a cross. He made Himself subject to His enemies on earth. He is not like that in the Book of Revelation. He is in control. He is still the Lamb of God, but we see the wrath of the Lamb that terrifies the earth.
I am reading the Bible in 2020 using the daily M'Cheyne (Robert Murray M'Cheyne) plan. I thought it would add a layer of substance to in addition to the four chapters a day, to also read commentaries for those chapters. For that I am using Matthew Henry's Commentary on the Whole Bible. But the plan goes through the New Testament (and Psalms, I believe) twice. So now that I've finished Henry's commentary for the New Testament, I am tackling the New Testament commentary section of J. Vernon McGee's series.This is not my first time reading J. Vernon McGee. I've read probably thirty or so of his commentaries. Most recently 2 John, 3 John, Jude.
I really am LOVING McGee. This has been the best idea--to correspond my Bible reading with commentary reading.
This is NOT my first time reading McGee's commentary on Revelation. In fact, I'd say that his commentary on Revelations was one of the first of his to read way back when. (The only one that might have come first was Isaiah or Jeremiah?)
The first volume covers the first five chapters.The first three chapters introduce the Revelation and focus on the seven letters to the seven churches. McGee's insights on these letters is quite interesting. At the very least, he provides great background on the actual churches. He also argues that each church represents an age of the Christian church. You don't have to agree with him perfectly to learn from him. For example, you can think all of the letters are relevant all the time to every church and still gain from reading McGee's commentary. Chapters four and five take us to heaven and gives us a glimpse of the Worthy Lamb.One thing that I definitely appreciated about this commentary is the fact that J. Vernon McGee is decidedly premillennialist. I don't always, always, always agree with him when it comes to interpreting the rapture and the Great Tribulation--I do affirm a literal thousand year reign. (That isn't really addressed in this one.) But I also really appreciated how accessible it makes the whole book. For example,

Let's look at the Book of Revelation as an airport with ten great airlines coming into it. We need to understand where each began and how it was developed as it comes into the Book of Revelation. The ten great subjects of prophecy which find their consummation here are these:
1. The Lord Jesus Christ. He is the subject of the book. The subject is not the beasts nor the bowls of wrath but the Sin-bearer. The first mention of Him is way back in Genesis 3:15, as the Seed of the woman.
2. The church does not begin in the Old Testament. It is first mentioned by the Lord Jesus in Matthew 16:18.
3. The resurrection and the translation of the saints (see John 14; 1 Thessalonians 4:13-18, 1 Corinthians 15:51-52).
4. The Great Tribulation, spoken of back in Deuteronomy 4 where God says that His people would be in tribulation.
5. Satan and evil (see Ezekiel 28:11-18)
6. The "man of sin" (see Ezekiel 28:1-10)
7. The course and end of apostate Christendom (see Daniel 2:31-45; Matthew 13)
8. The beginning, course, and end of the "times of the Gentiles" (see Daniel 2:37-45; Luke 21:24) The Lord Jesus said that Jerusalem will be trodden down of the Gentiles until the Times of the Gentiles are fulfilled.
9. The second coming of Christ. According to Jude 14-15, Enoch spoke of that, which takes us back to the time of the Genesis record.
10. Israel's covenants, beginning with the covenant which God made with Abraham in Genesis 12:1-3. God promised Israel five things and God says in Revelation that he will fulfill them all.
Now I want to make a positive statement: The book of Revelation is not a difficult book. The liberal theologian has tried to make it a difficult book, and the amillennialist considers it a symbolic and hard-to-understand book. Even some of our premillennialists are trying to demonstrate that it is weird and wild. Actually it is the most orderly book in the Bible.

My friend, the Scripture does not leave us in the dark regarding what He is doing today. It mentions three very definite ministries.
First, there is the intercession of Christ. He is our Great High Priest. He is standing at the golden altar in heaven today, where He ever lives to make intercession for us (Hebrews 7:25). We love that part of His ministry. It is a wonderful thing.
Secondly, we have the intervention of Christ, He steps outside of the Holy Place to the laver. There He washes the feet of those who are His own. He washes those who have confessed their sins. Christians have sin, and those sins must be confessed in order to have fellowship with Him. "If we confess our sins, he is faithful and just to forgive us our sins, and to cleanse us from all unrighteousness." (1 John 1:9) He is girded today with the towel, and He carries the basin; He intervenes on our behalf.
There is yet another ministry of Christ that is not very popular. It is the ministry mentioned in the first chapter of Revelation, and I think that is one reason this section of Revelation is so little known. Here we see His ministry of inspection. What Christ is doing today is clearly outlined in the Scriptures.

J. Vernon McGee gave me a lot to think about!
Other favorite quotes:

To those who claim that it is all symbolic and beyond our understanding, I say that the Book of Revelation is to be taken literally. And when a symbol is used, it will be so stated. Also it will be symbolic of reality, and the reality will be more real than the symbol for the simple reason that John uses symbols to describe reality. In our study of the book, that is an all–important principle to follow. Let’s allow the Revelation to say what it wants to say.

There is a hard core of real facts in this book. What are "things"? One night Mrs. McGee and I took care of our little grandson. We let him play in the den where we keep a bunch of toys for him to play with when he stays with us. He went into the den and got out all of those things. In fact, he calls them his things. He spread them all over the floor of the den. We indulge the little fellow, and we didn't make him pick up all of his toys after he was through playing. We didn't pick them up either. So later that night, when I walked through the den, I stepped on some of his things. In fact, I stumbled over them and took a tumble. You can say that "things" are symbols, but you don't take a tumble over symbols. And in the book of Revelation, the "things" are made out of hard stuff. These "things" are reality. Any time John uses a symbol, he will make it clear to us that he is using a symbol. And we can be sure that he is using a symbol because the reality is far greater than the symbol. In fact, the symbol is a poor representation of the reality.

“I am Alpha and Omega.” This is quite a remarkable statement in the Greek language. The alpha and omega are the first and last letters of the Greek alphabet. From an alphabet you make words, and Jesus Christ is called the “Word of God”—the full revelation and intelligent communication of God. He is the only alphabet you can use to reach God, my friend. The only language God speaks and understands is the language where Jesus is the Alpha and the Omega and all the letters in between. He is the “A” and the “Z,” and He is the “ABC.” If you are going to get through to God the Father, you will have to go through the Son, Jesus Christ.

Let me remind you that this is a Christocentric book. The glorified Christ is the subject. Don’t get your eyes on the horsemen or on the bowls of wrath or on the beasts—they are just passing through. Fix your eyes on the Lord Jesus Christ. He is the One who was, who is, and who will be. He is the same yesterday, today, and forever. And John is to write the vision he has had of Him.

I have a sermon which I have not preached in quite some while, which is entitled, “Why Do You Want to Go to Heaven?” Many people say that not everybody who is talking about heaven is going to heaven. The better question is, Why do you want to go to heaven? Is the idea to miss hell? I myself do not think that to be an unworthy motive, but may I say to you that if you go to heaven, you are going to find yourself either getting down on your face or getting up, worshiping the triune God and especially the Lord Jesus Christ. If you find worship boring down here and you are not interested in worshiping the Lord Jesus and expressing your heart’s desire to Him, why in the world do you want to go to heaven? We are going to spend a lot of time up there worshiping Him.